The Toolsy is an independent site. Some of the links below are affiliate links, meaning, at no additional cost to you, we earn a commission if you click through and purchase. Learn more
Last Updated on January 11, 2021
Instance 1 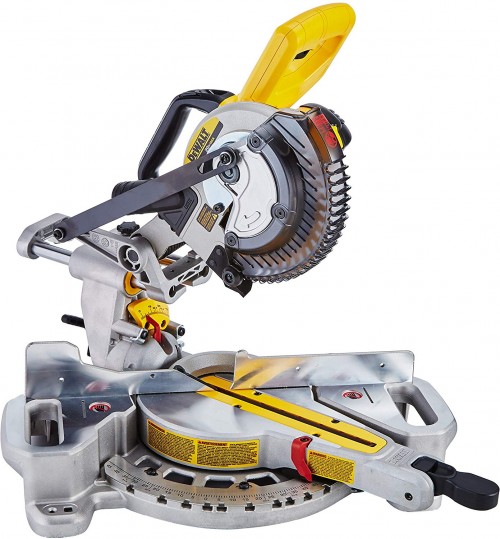 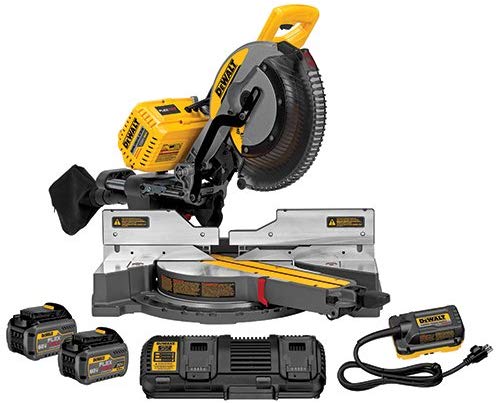 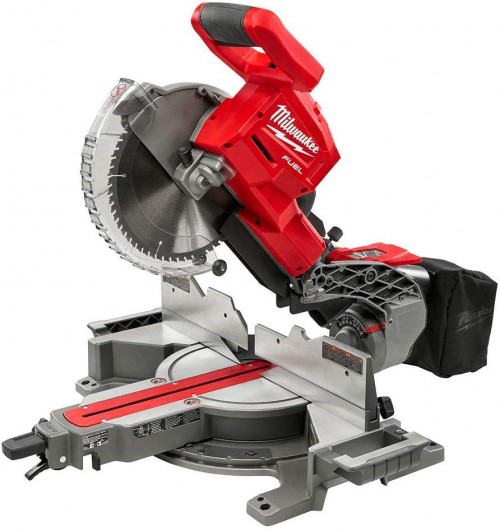 If there’s anyone power “shop saw” or “bench saw” that has made a difference in how carpenters do their work, it’s the power miter saw. These saws allow carpenters to accurately cut just about any angle they can think of in architectural moldings, including compound miters, which used to be painstakingly made by hand. About the only thing that can be done to improve this workhorse, is by make it cordless… and that has now happened.

Cordless miter saws give professional carpenters and do-it-yourselfers alike the ability to cut and install moldings in ways never imagined before, and do it with unparalleled convenience. Eliminating the need for a power cord has meant that these versatile tools can be used virtually anywhere, even if there is no power to plug into. If you’re doing any sort of finish carpentry work, a cordless miter saw is a necessity.

Today’s saws, which incorporate the ability to do compound cutting, have greatly eased the burden on the carpenter, basically eliminating the need to do coping cuts, replacing them with miter cuts, both for inside and outside corners, including compound miter cuts.

Our Favorite Cordless Miter Saws on the Market 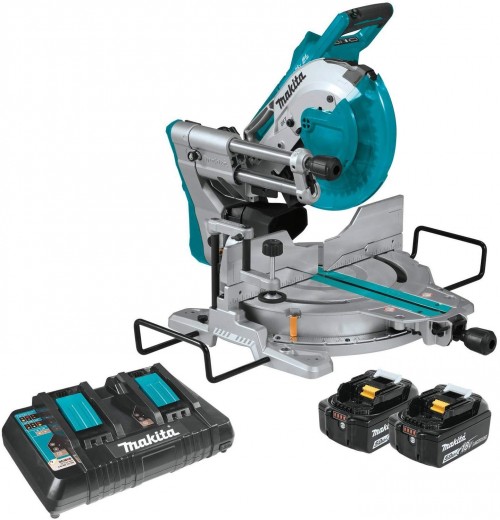 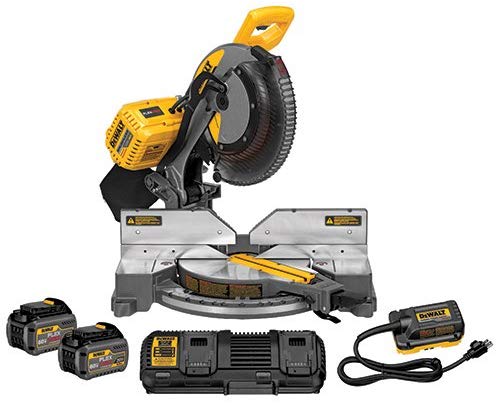 DeWalt is the biggest name in the cordless miter saw business, with more models on the market than any of their competitors. While smaller, in comparison to the 10 inch and 12 inch miter saws we’re looking at, this is the most popular cordless miter saw around.

The compact size and light weight (at only 31.6 lbs.), combined with being cordless, make this the most portable battery powered miter saw around.

Although this is an 18 volt saw, Milwaukee has a reputation for getting more torque out of their cordless power tools than anyone else around. So don’t let that scare you. Their RedLithium battery pack is rated as the most durable pack on the market. a shadow cut line, rather than a laser, helps align cuts perfectly.

If you’re looking for sheer power, size and capability, the DeWalt DHS790AT2 is the best cordless compound miter saw currently on the market.

This saw was obviously designed with the purpose of providing carpenters with a huge range of capability. For anyone who is doing projects combining moldings, working with a lot of crown molding or any other fancy architectural woodwork, this is the saw to use.

I particularly like the dual voltage design of this saw. While manufacturers strive to get the most work possible out of their batteries, having the ability to switch over to house current, when necessary, provides a considerable amount of freedom. When a lot of cutting is needed, this is the way to go.

You can cut 7 ½” baseboard or crown molding vertically or cut 13 3/7” crown molding, laying it flat. That makes this saw the largest cordless compound miter saw on the market.

Makita is known for their cordless tools, being one of the first companies to make professional-grade cordless tools. This saw shows their dedication to maintaining their position in the market, providing a dual-bevel, sliding compound miter saw. It runs off of 2 – 18v LXT Lithium Ion batteries, proving a total of 36 volts to the motor.

Makita’s LTX battery system is known for the fastest recharge time of any manufacturer. That means that you can get this saw back in operation in as little as 20 minutes, after the battery drains. Considering that it cuts an impressive 334 2x4s or 192 2x12s on a charge, these 5.0Ah batteries will provide considerable work in a day.

The motor for this saw is brushless to reducing maintenance and electronically controlled for faster and smoother cutting. It automatically adjusts the brushless motor speed, based upon the material density. An included laser light helps to align cuts perfectly.

DeWalt has really upped the ante on the power game with this and one of their other cordless miter saws. This 12” miters saw uses two 60 volt batteries, for a total of 120 volts brushless motor.

Based on what I’ve seen with other cordless tools, it will outdo anything else on the market for torque. The manufacturer gives a hint about this in rating the brushless motor at 15 amps, something that you don’t see on other cordless tools, just corded ones. Oh, it will also run off of AC, so when the batteries run out, you can keep on working.

The 12” blade will cut a 4”x 6” timber on a 45° miter or a 2”x 8” on a 45° bevel. The large blade gives a vertical capacity for baseboard or crown molding of 6 5/8”. DeWalt’s Cutline Blade Positioning System provides perfect alignment for cuts.

DeWalt also wins the prize for the best cordless miter saw that provides the best product for your money. The DCS361M1 is an impressive saw for the money. Its large capacity for the blade size is only part of what makes this saw such a good deal and makes it so popular with contractors. The light weight and portability of this saw is another important feature to consider.

Even though the 7 ¼” blade of the DCS361M1 doesn’t provide as much cutting capacity as the 12” blade of our best overall saw, it is big enough for most projects. Unless you are using really large baseboard or really large cove molding, this saw will still do a great job of providing you with all the cuts that you need.

Before talking about what makes a good cordless miter saw, let’s clarify something. People confuse miter saws and chop saws all the time.

A miter saw is used for woodworking, specifically for cutting architectural moldings. As such, a very important part of its design is the ability to create precise angles, even compound angles.

Chop saws are used for metalworking; cutting metal tubing and bar stock for welding together, meaning that they only do limited miter cutting and that doesn’t have to be done all that accurately.

While it is at least theoretically possible to use the two types of saw interchangeably, by changing the blades, the results you would get would not be all that good.

A mitre saw can be used to cut off metal tubing, if the right blade is installed. But there is a good chance that the hot sparks from the metal could damage the surface of the saw, resulting in the wood being scratched.

If you tried the opposite, changing blades so you could cut wood on a cordless chop saw, you would not be able to get the accuracy needed.

How to Choose the Perfect Cordless Miter Saw

A cordless miter saw is a major power tool investment, so you want to buy something that has a reputation for quality. All of the brands we are going to look at are ones which have a reputation for quality, so that shouldn’t be an issue. Companies which are trying to put out low-cost products aren’t going to invest in what is necessary to make these saws.

Since we are talking cordless saws here, the voltage of the batteries used in the saw is an important indicator as to the power the saw can produce. Since cordless tools first came out, there has been a constant push to get more power out of them. Manufacturers have met this demand by increasing the voltage of the tools, as the increased voltage provides for greater torque. In some cases, these tools use two batteries, rather than one, increasing the power provided.

All of the cordless miter saws currently on the market use the newer Lithium-Ion battery technology, providing a larger battery capacity than previous types of batteries. Lithium-Ion batteries also provide the advantage of providing full power, up until they reach a point where they can no longer power the tool. This differs from Ni-Cd batteries, where the tool will slow down as the battery drains.

Selecting a cordless miter saw is more a matter of determining your need, than anything else. These saws can be broken down into a few basic categories:

In addition to the type of miter saw, the size of the blade has a lot to do with the capacity of the saw. When cutting baseboard or crown molding, the molding must be stood upright against the fence to cut the miter. A larger blade allows for a deeper cut, hence the ability to cut larger moldings. Miter saws range from 7-1/2” to 12” blade sizes.

Some saws are also more convenient to work with than others. You want to look at the location of the controls, including controls for adjusting the angle and bevel of the blade. This makes a difference in the efficiency of your work.

Another important feature which some include is a laser guide for aligning the cut. While an experienced carpenter will know exactly where their blade is going to make the cut, do-it-yourselfers may not always know that.

This feature allows you to get every cut right the first time, eliminating scrap and frustration from bad cuts.